This blog post goes over our trip to the Channel Islands National Park, Santa Cruz Island July 1 – 2 in 2021. As only one of the five islands in the National Park, we still have a lot more to explore. We did a 2 day, one night backpack camping trip at the Del Norte Campground; we hiked across the National Park; and we Kayaked at Scorpion Anchorage. We brought all of our water and food, and packed out ALL of our trash. Truthfully, we made some mistakes in our planning. Do as we say, not as we do!

The Quick Stats | Getting Here

Where: Departs from Ventura Harbor

When: multiple departures during the day

Travel time: about 60-90 minutes to Santa Cruz Island depending on weather and sea life

Distance: 20 miles off the California cost

Sight Seeing: Pods of the common dolphin are quite visible in the channel and often the ferry captain will slow down for sight seeing

We originally bought round trip tickets to and from Prisoners Harbor because it’s only 3.5 miles from the Del Norte Campground. Here’s where we went wrong; we booked a 9:30am kayaking tour at Scorpion Anchorage without adjusting our tickets prior. When we realized the mistake, it was too late to cancel and get our money back. At that point we had to decide if we wanted to hike across the island or eat our losses. We first called Island Adventure Company to see if they had a spot on the 12:30pm tour; they did. Next, we called Island Packers and they were able to adjust our island departure ticket’s location and time to work with our new kayaking tour time.

Water at Trailhead: No

The hike to Del Norte Campground from Prisoners Harbor is a great challenge but spectacularly beautiful. After you get off the pier you’ll some see some visitor info and a toilet on your right hand side. You’ll quickly come up to the Old Navy Road, which is the first part of the hike.

We took the steep Old Navy Road along the coast line about 1.1 miles up to its intersection with the Del Norte Trail. From there the trail is actually a trail and more narrow. We took the trail for the next 2.4 miles through the hilly coast line of Santa Cruz Island. The hike was tough as we ascended and descended the hills with 35+ lbs on our back. Make sure you pay attention to the sign indicating the road to the campsite and not to continue on the Del Norte Trail.

Number of sites: 4, max 16 people allowed at the campground at a time

Water at Campsite: No

Shade at Campsites: sites 3 and 4 have shade from trees

The campsites are a little spaced out but there isn’t much privacy provided by the trees. Each designated site has a picnic bench, fox box, and designated tent spot. We were at campsite No.3 and had a nice big oak tree to provide some shade. The campsite is nestled into a small little oak tree forest, but sites No. 1 & 2 don’t have shade. There is an above ground vault toilet just up the road from the 4th campsite; there are privacy walls set up but no roof and more importantly NO toilet paper.

Overall the views of the ocean from the campsite are fantastic and that night we saw an amazing array of stars as we slept with no rainfly. Unfortunately, we were so exhausted that we couldn’t even grab our phones to take picture in the middle of the night. By the time we woke up the marine layer inversion had occurred and we were in the morning fog.

Water on the Trail: No

Toilet on the Trail: No

Shade: Minimal to none

The Hike to Prisoner’s Harbor

We were up early the morning before sunrise so we could pack up and eat before our long hike. We needed to get to Scorpion Anchorage before our prepaid kayaking tour at 12:30pm. We officially started on our 10 mile journey at 6:44am, giving us just under 6 hours to make it across the island.

The hike starts as a continuation of Del Norte Trail. This time we were hiking in dense fog; with about 20 feet of visibility. The trail is much the same from before with consistent elevation change as we went up and down the hillside. We think we were along the coast at the start but couldn’t see the ocean. Our packs were slightly lighter in weight as we had drank a good amount of water the first day.

After a bit, we were back on the Old Navy Road. There were signs along the trail directing us towards Scorpion Anchorage. The Road continues for a while and continues to climb in elevation. At the same time, the vegetation and even some of the geology changes as you increase in elevation. Eventually after about 3 miles we broke the cloud layer. It was such a spectacular view to be high up above the ocean and clouds!

On mile 4 we had a beautiful view of Monto˜na Ridge! The trail dips a little here and the mile 5 marker, halfway point, is at the base of the trail before the big climb up the spine of a ridge to major saddle point. At the bottom of the trail we stopped, took our packs off and snacked for a few minutes. Little did we know, there was a picnic table another 30 or so feet down the trail that would have made taking the packs off and loading back up much easier.

After a short break we were ready for arguably the toughest part of the hike. From we were on a steady elevation gain and the trail quickly turned rocky. At this point foot placement was very strategic and so was balance. We had steep drop offs to the side and the heavy packs were definitely influencing our center of gravity. We were a little nervous scaling this part of the ridge. The trail was difficult to find at points and we were no longer using the hiking poles as we needed to our hands for stability on rocks or to pull ourselves up.

We had some awesome views as we looked back over the island. Soon we were at the saddle of the ridge. Our trail continued north towards Scorpion Anchorage and to the west was a trail continuing along the ridge and eventually to Coche Point. To the east was the tallest point on the Mountain but we didn’t look for a trail to that point. We continued along our trail making good time. At this point we were on a consistent decline but the trail was much different than the other side of the island. The trail was quite rocky, there were significantly less trees, and the view was unobstructed.

We made it to Scorpion Anchorage just after 11am. We had time to relax, hide in the shade, and eat some food using our jet boil. After checking in with Island Adventure Company and changing, we were ready to hit the ocean in the kayak.

No rentals; guided tours only

Wetsuit and other gear available

Kayaking was so much fun! We were a little nervous as we are inexperience kayakers with only a couple trips under our belt on the small lakes with minimal wake. We knew the ocean would be so much different, and it was, but not as difficult as we were expecting.

Island Adventure Company is the only tour company on the island. They lead tours because kayaking around the island coast can be dangerous. Our guide that day was Jeremy and he was fantastic. We were on the Discovery Tour, which is the shorter 3 hour version. And within that 3 hour block, we were only on the ocean for a little over an hour; and that was plenty! Jermey went over the rules and tips with us prior to getting in the water. Then we followed Jermey to some different sea caves on the coastline and they were spectacular and a little nerve racking! within the caves there can be a stronger currant or rougher water as the waves crash against the walls. We never felt pressured to do anything out of our comfort zone. Throughout the entire trip Jeremy was helpful, informative, and funny. It was an amazing way to wrap up our long trip. We highly recommend doing a kayaking tour. It was worth the money in our opinion!

Please remember we were there in July when the water is typically calmer but not at its warmest. The ocean off California’s coast is warmest in August and September after it has had all summer to warm up. 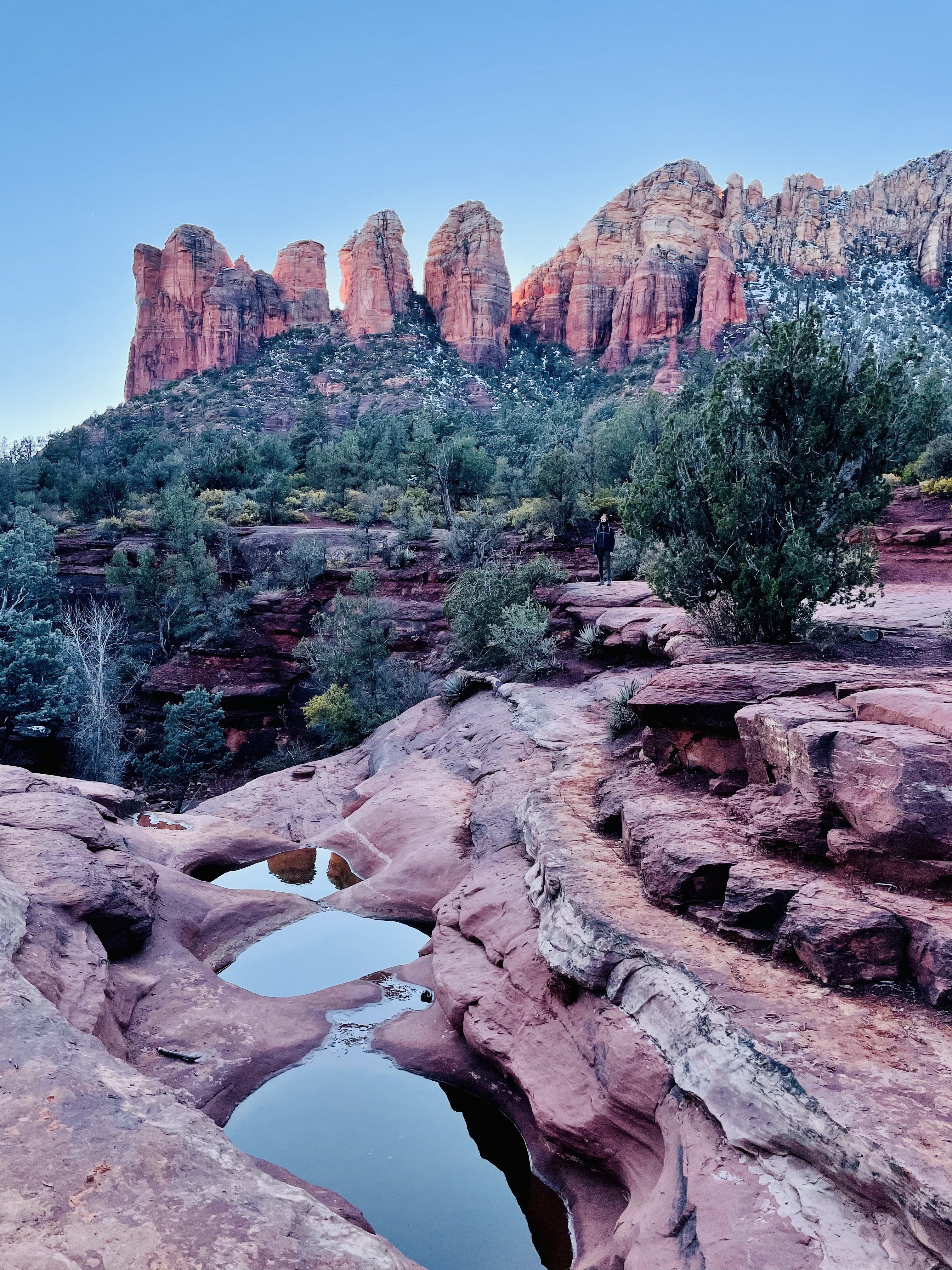